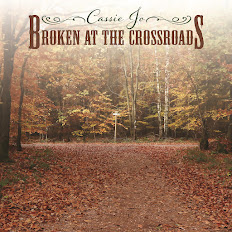 
Portland, OR, December 17, 2021 – (pr.com) – Searching radio stations today for country music is often challenging.  It can be difficult to quickly identify modern country stations from any other pop or adult contemporary music.  Cassie Jo’s debut album, “Broken at the Crossroads,” reminds us of days gone past.

Cassie Jo, a Portland native, was raised in a home where music was always a major part of her life.

“Country Music has always been about storytelling, and boy do I have a story to tell," commented Cassie Jo.  “I grew up listening to Bob Seger, AC/DC, and Guns N’ Roses. I transitioned to country during middle school with Reba McEntire, The Chicks, and Shania Twain. More recently, Miranda Lambert and Pistol Annies."

With songs like “She’s Not Loving Him,” “Couldn’t Be You,” and “Give Me Good Reason,” Cassie Jo’s choices on song titles are reminiscent of Country Music’s long history of life’s love and pain.  The album’s single, “Last Star,” features her signature acoustic guitar style and soaring vocal chorus.

"Mom got me my first guitar,” reminisces Cassie Jo, referring to her mother, Reda Bell Stroup. “I memorized the picture chords out of a vintage music book. Even though I was in choir and band, music theory was not my strong suit. I played what sounded good.  Music has pulled me through some rough, bumpy roads.  Releasing this album signifies my healing."

“The BentBeat Team did a great job taking Cassie Jo through the album she wanted to record,” said Beatty.  “Austin’s electric guitar and Krista’s vocal work was exactly what these songs needed. If I listen (to the album) while closing my eyes, the songs bring back memories of endless hours driving through the Midwest, tuning into AM radio as a youth.”

“Broken at the Crossroads” album is available for sale on Amazon (CD), and is streaming now on Amazon Music, Apple Music, Spotify and wherever you find great music.

About BentBeat Productions: BentBeat is based in Portland, Oregon. Primarily focusing on partnering with musicians to produce, record, and release high quality broadcast-level music through streaming services, social media and traditional distribution. The entire catalog is available on Amazon, Spotify, Apple Music and all major music sites. Please join in supporting musicians.